The mercantilist dependence on exports for growth, a winner for the past 70 years, has reached diminishing returns. Rather than be a source of growth, it’s a source of stagnation.

Conventional wisdom holds that geopolitical power is inevitably shifting from West to East. It isn’t quite this simple. The real shift is occurring between three sources of power that are not so neatly geographic:

2. The mercantilist exporters of products

Gordon Long and I tease apart the many dynamics in this complex power shift in Tectonic Shift of Mercantilism Revalued (42 min). There are three starting points: neocolonialism, mercantilism and importer by choice.

In classic colonialism, the colonial power expropriated commodities by force. The invaders took control of commodity-producing nations via military force and then oversaw the extraction of low-cost raw materials to provide the home markets with cheap materials to feed the colonial power’s valued-added manufacturing. The manufactured goods were then sold in the captured markets of the colonial states.

In what I call the Neocolonial Model, the control mechanism isn’t military force, it’s financialization and globalization. The Neocolonial Power extends cheap credit to the commodity exporting nation, and the state and its citizens gorge on this heretofore unavailable banquet of debt. Soon the state and its enterprises are creaking under unsustainable debt loads, and the Neocolonial Power swaps assets for debt, buying up the most valuable resources on the cheap or extracting the wealth via interest payments and refinancing.

The EU, Neofeudalism and the Neocolonial-Financialization Model (May 24, 2012)

The West has been extracting wealth via the Neocolonial Model for decades, and now it has a competitor: China.

As Gordon explains in our program, China has perfected this Neocolonial Model with its Belt and Road Initiative (BRI). which offered low-cost loans to commodity-producing nations which are in effect mortgages on their most valuable assets – harbors, etc. Once the commodity-producing nation gets into financial trouble, China forecloses on the loan ‘and takes ownership of the resources, ports, etc.

The second dynamic is mercantilismthe optimization of an entire economy for exports of value-added manufactured goods. This is the model adopted by Germany and Japan in the early 1950s: national policies were designed to subsidize and promote exports to other nations as the primary means of achieving high rates of growth.

The priority for US foreign policy was to strengthen the war-torn free-market democracies West and East so they would not fall under Soviet control, and so the US enabled these mercantilist policies to the detriment of domestic producers as one of the costs of the Cold War with the USSR

In effect, the US accepted the role of importer by choicebecoming the market where the surplus production of our Cold War allies could be dumped without restriction, all for critically important geopolitical reasons. In the 1950s and 60s, the US market was so large and the exports of the mercantilist economies so modest, the policy of being the dumping ground for allies’ exports did not disrupt the domestic economy.

Currencies play a critical role in mercantilism. As long as the US dollar (USD) was strong and the mercantilist currencies were weak, everyone benefited: the exporting nations’ goods were cheap in the US and soon carved out a niche in US markets. Since the mercantilist economies sought to limit imports, the strong dollar was not much of a drag on their growth.

In terms of expanding their tourist industries, the strong dollar was a rocket-booster: American tourists flocked to Europe, as the dollar went far in both Europe and Japan.

All three dynamics changed dramatically in the 1970s and 1980s. The OPEC nations took control of pricing their hydrocarbon commodities at the critical point when US oil production had peaked and was declining. This sent a shockwave of repricing energy through the global economy that helped generate a stagflationary decade of adjustment to higher input prices.

At the same time, the external costs of industrialization (pollution, environmental damage) had to be priced in as well via regulations mandating higher efficiencies and the clean-up of industrialized nations’ water, air and soil.

In this same juncture, the stream of allies’ goods being imported into the US became a floodcreating a permanently large negative balance of trade (ie trade deficit) and undercutting domestic manufacturers as a result of the strong dollar / weak currencies of Europe and Japan.

The permanent trade deficits were the result of 1) issuing the world’s core reserve currency and 2) being the importer of choice who accepted virtually unlimited exports from allies.

This led to the political revaluation of currencies in the 1985 Plaza Accord which weakened the dollar and strengthened the currencies of Japan and the European Union (EU). Japan also agreed to limit auto exports to the US, a move that led to Japanese auto manufacturers establishing assembly plants in North America.

The dynamics changed again with the collapse of the Soviet Union in 1991 and the emergence of China as “the workshop of the world.” Just as the geopolitical reason to remain the importer by choice disappeared, the immense opportunities to boost corporate profits by offshoring production to China beckoned, eventually widening America’s trade deficit to new extremes as its corporate profits soared to unprecedented heights.

As the mercantilist economy par excellenceChina managed its currency with a direct, centrally-controlled currency peg to the US dollar. This kept China’s currency (RMB) set at levels that supported its hyper-mercantilist exports to the US and other developed nations.

One often under-appreciated reason why the Soviet Union collapsed was low oil prices in the late 1980s. The Soviets’ primary source of export revenues was oil and natural gas, and once the revenues fell below a critical level, the Soviet Union ceased to be financially viable.

China’s fast-growing economy was soon sucking in unprecedented amounts of commodities: oil, copper, soy, etc. In other words, China became a vast importer of necessity like Japan. Even though China has large coal reserves, much of its highest-grade coal has already been depleted. Its modest oil reserves have also been largely drained.

What happens to mercantilist economies? They become importers of necessitytotally dependent on neocolonial sources of cheap commodities and import markets open enough and large enough to absorb their stupendous flood of exports.

The commodity-producing nations have finally wearied of being stripmined by the West and East, and are starting a long-delayed unified effort to take control of the resources being plundered by the developed / mercantilist economies. This is now being fueled by scarcities in commodities, scarcities fueled by many sources: depletion, supply chain disruptions, geopolitical blackmail, etc.

As financialization and globalization have reached the point of diminishing returnsthey are now in the decline phase. These drivers of global growth are unraveling at the same time that commodity prices are rising in a secular trend and the global economy is entering stagflation.

These conditions are squeezing the mercantilist economies as their costs of materials rise while the markets for their exports contract. Another problem with the mercantilist strategy of depending on exports for growth is there’s always a cheaper competitor on the rise. So Vietnam and other rising exporters are siphoning production from China and other mercantilist nations.

Meanwhile, back on the currency front, the US dollar is gaining purchasing power at the expense of other currencies. This is adding a secondary “tax” on higher commodity prices, as the majority of commodities are priced in USD. A stronger USD moderates commodity inflation for the US and exacerbates it for everyone using other currencies.

A stronger USD is also making China’s currency less competitive, as it rises along with the USD due to its peg to the dollar.

The mercantilist dependence on exports for growth, a winner for the past 70 years, has reached diminishing returns. Rather than be a source of growth, it’s a source of stagnation.

There is much more in our slides and discussion: Tectonic Shift of Mercantilism Revalued 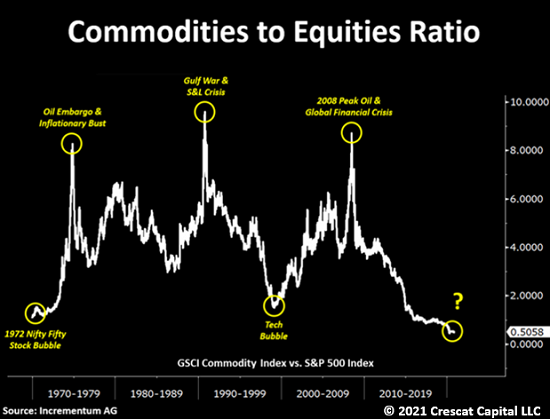 My new book is now available at a 10% discount this month: When You Can’t Go On: Burnout, Reckoning and Renewal.

If you found value in this content, please join me in seeking solutions by becoming a $ 1 / month patron of my work via patreon.com.

Will You Be Richer or Poorer ?: Profit, Power, and AI in a Traumatized World
(Kindle $ 5, print $ 10, audiobook) Read the first section for free (PDF).

The Adventures of the Consulting Philosopher: The Disappearance of Drake $ 1.29 Kindle, $ 8.95 print); read the first chapters for free (PDF)

Become a $ 1 / month patron of my work via patreon.com.