After promising to introduce a federal integrity commission and getting elected on a platform which included restoring good governance, Anthony Albanese is quite rightly taking a hard line on ministers when it comes to owning shares in public companies.

“Ministers will not have any direct shareholdings. Ministers are required to divest themselves of shareholdings, except in superannuation and other broadly diversified managed funds. There will be no ‘blind trust’ arrangements,” the prime minister’s code of conduct says, even reaching down to humble assistant ministers.

So what happens when the Queensland Labor Party owns a multimillion-dollar stake in the $14 billion ASX-listed bancassurance outfit Suncorp which controversially proposes selling its banking division to rival ANZ for $4.9 billion — undermining competition and further entrenching the power of Australia’s big four banks .

First up, federal Treasurer and proud Queenslander Jim Chalmers needs to get this conflict of interest on the record and disclose how it will be managed.

Get Crikey FREE to your inbox every weekday morning with the Crikey Worm.

When it comes to governance and transparency, Labor’s Queensland division is not exactly a star performer. For instance, it owns a $60 million-plus share portfolio through its Labor Holdings-associated entity, as Crikey explained in January, pointing out that the party had a $10 million stake in CSL at the same time as the debate about vaccine subsidies and government contracts was raging.

The CSL share register reveals that “Labor Holdings Pty Ltd” pops up in the top 150, with 37,700 shares (now worth $11.2 million) registered with stockbroker “Morgans WealthPlus” in Brisbane.

As I wrote in 2008 in The Sunday Age, the ALP’s Queensland division pocketed $16.5 million in 1986 when it sold radio station 4KQ. The proceeds were put into the sharemarket and by 2007 its biggest stake was 1.18 million Suncorp shares which, if held today, would be worth $14 million.

Unfortunately, Labor Holdings stopped disclosing individual dividend payments to the AEC in 2015, as you can see from this pathetic effort in 2019-20.

By way of comparison, the Victorian Liberals have arguable control over an estimated $90 million share portfolio housed in the Cormack Foundation, which was seeded in a similar way when the party sold Melbourne radio station 3XY for about $16 million in the late 1980s. Cormack’s largest investment is about 266,000 Commonwealth Bank shares which are currently worth $25 million.

We know about this whopping Liberal Party equity play with CBA because the Cormack Foundation does disclose its individual dividend payments to the AEC, as you can see here, rather than hiding everything behind stockbroker Morgans, as Queensland Labor does. 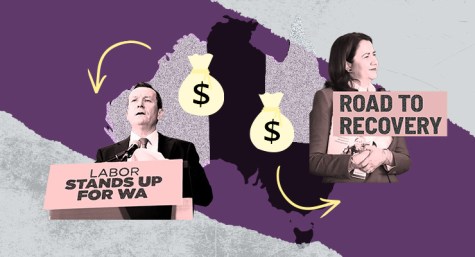 Why does this matter? Well, Bernard Keane and Glenn Dyer argued in Crikey yesterday that ANZ’s Suncorp banking purchase should be blocked by either the Australian Competition and Consumer Commission or Chalmers. Frankly, it’s hard to see this happening. When it comes to banking, Suncorp is a bit of a one-state wonder unlike its genuinely national insurance business which operates non-Queensland brands such as AAMI and GIO.

New ACCC boss Gina Cass-Gottlieb will certainly come under pressure to block the deal on competition grounds and the parochial Queensland government also has blocking power. This explains the over-the-top talk of Olympic and green energy funding in yesterday’s main ANZ announcement, plus the promise to not close any Queensland Suncorp branches for three years and retain net staff numbers.

It might not be a great time to be a teller in ANZ’s Queensland branch network – although this wasn’t mentioned on the shopping list of benefits for Queensland spelled out by Suncorp yesterday.

Another disappointing regulatory aspect is that neither set of shareholders get to vote. If Suncorp wants to cash out of 30% of its assets then surely shareholder approval should be sought. Similarly, if this was a jurisdiction such as Hong Kong, the UK or South Africa, ANZ’s shareholders would be asked if they wished to splash $4.9 billion on Suncorp’s banking division.

The transaction industry would hate such a reform but if Chalmers wants to do anything, improving the ability of shareholders on both sides of a transaction to vote would be a great start.

As for who is getting the better of the deal, like most competition-reducing acquisitions, both sets of shareholders will probably share in the upside while customers lose out. This is the story of Australian banking since the combined market capitalization of the big four bottomed at about $20 billion in 1992 when both ANZ and Westpac almost went broke thanks to Paul Keating’s 17% official interest rates and the recession we had to have.

The deal should arguably be approved because ANZ is a clear last in the home mortgage market with a loan book (including investment properties) worth just $261.1 billion, compared with market leader CBA on $516.6 billion, Westpac’s $430 billion and NAB’s $289.3 billion.

Suncorp’s $46.2 billion residential book will still leave ANZ in third place with a combined $307.3 billion, hardly grounds for the ACCC to block the deal.

Suncorp shares jumped 6.1% or 68 cents to $11.78 yesterday morning, suggesting the market believes ANZ has paid a full price but not gone completely over the top.

The only announced financial services merger that has been blocked by regulators was ANZ’s proposed purchase of National Mutual in 1990, which then treasurer and acting prime minister Keating rejected in the following terms before introducing the quirky “four pillars policy”, which has never actually been legislated.

The Howard-Costello government was far too permissive on the financial services industry, particularly by waving through CBA’s $8 billion purchase of Colonial in 2000, which brought the old State Bank of Victoria and State Bank of NSW under the one roof.

Similarly, then treasurer Wayne Swan should arguably have blocked Westpac’s $18.6 billion St George takeover in 2008, as this also brought the old State Bank of South Australia and Advance Bank into the Westpac fold.

Neither NAB or ANZ have snapped up any of Australia’s regional or former state banks over the past 20 years so it would be a bit rough to suddenly draw a red line preventing our fourth biggest bank from spending $4.9 billion on Suncorp’s banking division when all previous bank mergers have been waved through.