In the creation of a new drug, there comes a point where you have to finally put the molecule in a real creature — one at a time — and see if it actually does what you think it does. Manifold Bio’s molecular machinery could let a hundred molecules be tested simultaneously in a single living system, potentially upending the whole process.

The drug discovery space has advanced a lot in the last few years, first with fast and cheap gene transcription, then with CRISPR, then with AI-powered proteomics. You don’t have to know what all of those do, however, to understand that in the end, no matter how much they accelerate fundamental research, live testing remains a major bottleneck.

In vivo means “in life,” as opposed to in vitro (in glass) or in silico (simulated), and mice are the usual critters that get the dubious honor of testing out a new drug’s safety and efficacy. And the general equation there is: one friend, one mouse. Because this is such a logistically challenging and time-consuming part of drug testing, it is usually left until there are only a handful of molecules the company or lab is fairly confident will work. But it is also the first — and often the last — time any of these drugs actually has to work in a real body, and the result is a lot of washing out.

Enter Manifold Bio. The startup, armed with $40 million in series A funding, aims to make mouse tests a hundred times more efficient and effective, changing that equation and enabling earlier in vivo testing that verifies a molecule’s function before you dump a few million bucks worth of resources into it.

“The best test environment is reality,” explained the founder and CEO of Manifold Bio, Gleb Kuznetsov. “But as you get further in a drug development program, you’re investing more and more, to do more and more expensive experiments and work. We’re optimizing much earlier, so once we’re at that final gate of going to clinical tests, we’re moving forward with a drug that has already been optimized. If you can have more conviction that this is the right drug to be investing in, you can address the key risk of your investment.”

Currently, at the mouse testing phase, you generally have a target condition and a handful of candidate drug molecules. One goes in each mouse and you observe what happens — and there’s a real chance all of them will flunk at this crucial stage.

Manifold’s innovation is parallelizing in vivo testing with up to a hundred simultaneous tests in a single mouse. To make this happen it has invented a “protein barcoding” tech that you might think of as molecular RFID tags.

Illustration of multiple “barcodes” attached to proteins to be tested in vivo.

“The way it works is we attach an extra bit of protein, our protein barcode, and that makes the protein trackable and we can track it wherever it goes in a system,” Kuznetsov said. Rather than verifying lab tests, “It’s more for informing design. There’s a lot of AI and machine learning driven development, a lot of design on the computer. We focus on a specific cancer target, something on the surface of cancer cells that really flags that this is a cancer cell, and figure out the drug designs that go very specifically to those cancer cells — and don’t go anywhere else.”

The problem here is that at this stage, you might be looking at a thousand different proteins, each of which may only vary from the others by a couple of amino acids, the building blocks that give proteins their shape and function.

That’s where Manifold’s barcodes come in. Each protein, however similar, gets a tag that is totally unique and identifiable after the fact when put through a proprietary DNA conversion process. Equal quantities of 100 molecules go into the mouse, maybe 95 don’t do anything, 3 attach to the cancer decently, and 2 attach at a much higher rate. That’s 98 molecules you don’t have to take through further testing.

This screening process takes a lot of uncertainty out of the equation, since you know for sure that this protein actually does what you designed it to do, in a living mammalian system. And this is right after design and low volume synthesis, relatively cheap and early parts of the process. 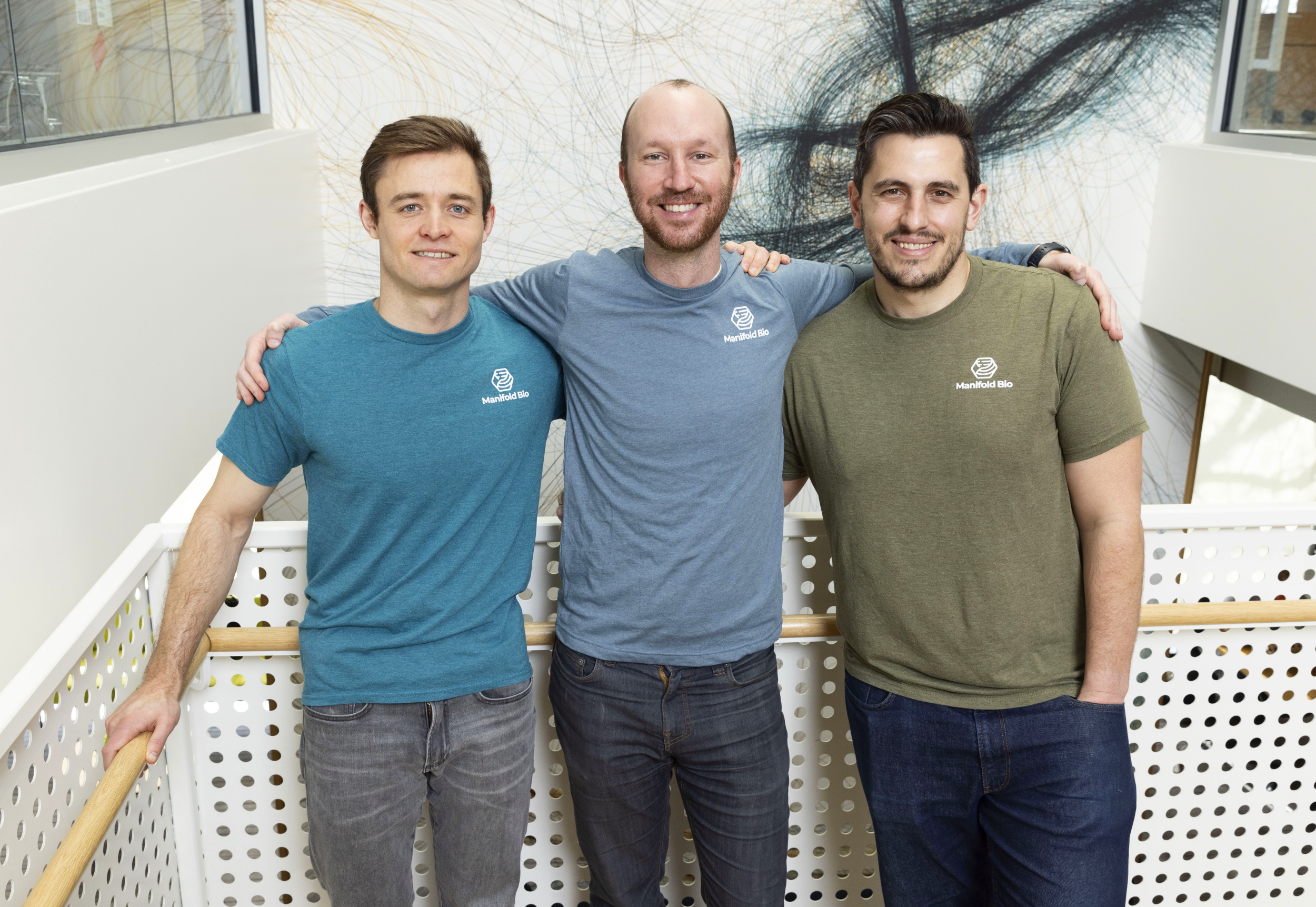 The tough part was designing the tags themselves. If you think about it, each little protein barcode has to meet a really high bar.

“There’s a molecular biology component but there’s also a lot of computational side of making these things detectable. They also have to not affect the behavior of the drug, and they must be stable, detectable, unique, and manufacturable,” said Kuznetsov. Designing one would be a challenge — designing 100 could be the foundation of an entirely new drug development path. He compared it to the change that happened in computing when we went from serial processing on CPUs to parallel processing in GPUs.

To be clear, though, this isn’t about supercharging testing at other companies — Manifold aims to build an entire vertically integrated drug company based on this biotech-infused approach to testing. 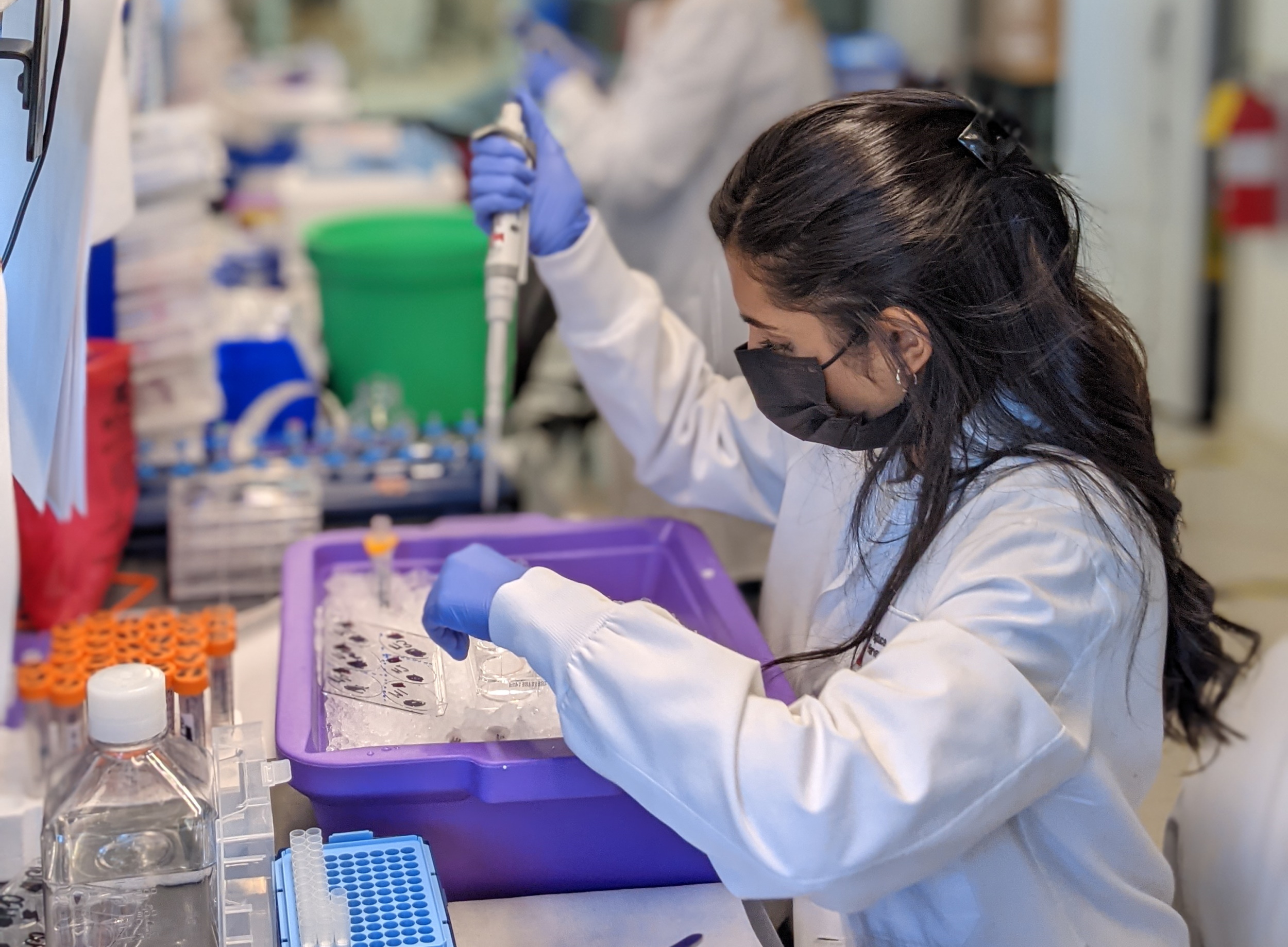 A Manifold Bio employee works in their wet lab.

“We’re going end-to-end internally,” Kuznetsov said. “The drugs we have in house, we created those molecules from scratch, we’ve put them in these pooled in vivo tests, and they’ll soon be at the level of clinical trials.”

Their seed round was to build the foundation and show the tech works — which it has now done. The $40MA round is to start the more expensive and standardized clinical testing process. The company is focused on cancer for now, since that’s not only a huge threat but also a good match for the types of drugs this process excels at finding.

The company is run by Kuznetsov and his co-founders, but genetics pioneer George Church helped come up with and build out the company to start. He is currently an advisor.

The new funding round was led by Triatomic Capital, with participation from new investors Section 32, FPV Ventures, Horizons Ventures, and Tencent, and existing investors Playground Global, Fifty Years, and FAST by GETTYLAB.