As companies adopt new tools to accommodate remote ways of working, it’s becoming tougher for their workforce to keep track of and manage information across internal services. It’s not just the C-suite that’s being challenged — lower-level employees, too, are having to wrestle with employers’ now-sprawling catalogs of apps. According to Statista, the average enterprise uses 110 software-as-a-service apps today, up from eight in 2015. Coveo found that, as a result, workers spend just over 3 hours a day searching for information in 2022, an hour more compared to a year ago.

If you ask Perttu Ojansuu, the answer is an intranet, or a company-specific, digital portal that centralizes much of a businesses’ software and documentation in one place. Ojansuu recognizes his bias — he co-founded Happeo, a startup developing intranet software to connect employees with company tools. But Ojansuu says that his view was shaped by his experiences working with customers at Gapps, a Finland-based Google Workspace reseller he helped to co-found in 2010.

“[With Gapps,] co-founder Antero Hanhirova and I saw a big opportunity to help enterprise companies in the Nordics with their cloud transformation,” Ojansuu told TechCrunch in a recent interview. “During our Gapps time, we identified a significant and consistent challenge that our customers were facing: there wasn’t any central source of truth for information that could be readily integrated with other software-as-a-service tools… In 2016, born from that customer challenge, we decided to create a comprehensive solution for our customers.”

Ojansuu and Hanhirova launched Happeno‘s first incarnation, “Universe,” in early 2016. In 2017, the two officially incorporated the company. To date, Happeo has raised $47 million in venture capital, including a $26 million Series B round co-led by Endeit Capital, Smartfin and Evli Growth Partners that closed today. (Inkef Capital, Maki.vc, and Vendep Capital also participated in the Series B.)

Happeo aims to connect teams and people in an “organic way,” Ojansuu says, letting them create channels and pages around projects and mutual interests. The platform brings resources and apps together in a searchable home portal, with a launcher that allows employees to jump into different software.

Happeo’s “federated search” capability can search across a company’s various internal tools. Beyond this, the service — which integrates with Microsoft 365 and Google Workspace — offers a place to host shared files and documents. On the back end, an analytics dashboard shows metrics like channel, page and post engagement, as well as search activity (eg, the most searched keywords).

“As tech companies grow fast, they don’t have time to build processes — the result is information chaos, leading to slowed-down productivity and low employee experience,” Ojansuu explained via an email Q&A. “That’s where Happeno comes in… [It] removes the burden of sharing important updates from instant messaging tools, so teams can go back to using these to collaborate instead of being overwhelmed by information.”

Intranet platforms are hardly new — they’ve been around in some form for decades. And there are plenty of competitors in the space, including Google and Microsoft. Last July, Simpplr raised $32 million for its tools to build intranet sites. More recently (in March), Staffbase landed $115 million at a $1.1 billion valuation to expand its intranet-style comms platform.

It’s worth noting that the large financing rounds are partly a reflection of the enthusiasm among VCs for HR tech, broadly speaking. The year 2021 was set to be a record year for HR tech vendors, with around $14 billion invested across over 300 deals.

One hurdle for Happeo to overcome is the perception that intranet services aren’t particularly useful — or pleasant — from a user perspective. One survey found that only 13% of employees use their intranets on a daily basis, while 31% admit to having never used them. Research pegs outdated or irrelevant content and a lack of executive engagement as the major culprits, along with a lack of clear purpose. 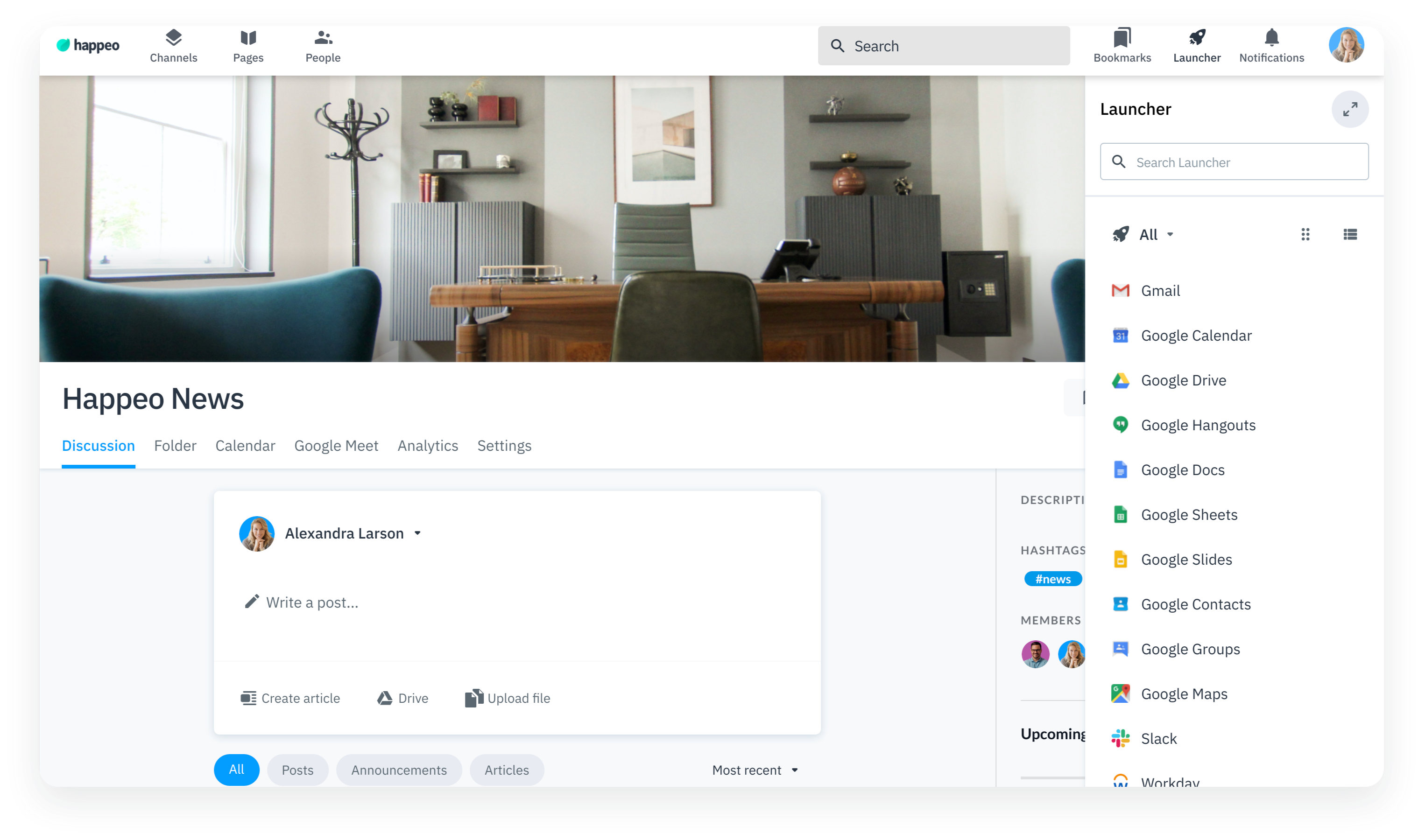 Booth Ojansuu claims that Happeno’s is more holistic than most.

“Work is no longer a place where employees come together, share knowledge, bounce ideas off each other, communicate, and build trust and connection. Brick-and-mortar offices and water cooler conversations have disappeared. Workers took all this shared information with us into the home office,” Ojansuu told TechCrunch. “Employee experience is now at the center of the HR tech market… [E]veryone wants to build an ‘experience layer’ that sits in front of employees. Happened is addressing this actively by becoming the central source of truth for companies to access all their information.”

Ojansuu says — for what it’s worth — that the sales pitch convinced Rajeev Suri, the former CEO of Nokia, to make his first-ever angel investment in a Finnish company. It probably helped that Happeo had over 366 customers prior to the closing of the Series B, including Pinterest, Decathlon and Marqeta.

“The problems Happened solves are business-critical to success and its urgency for companies is high both in times of economic downturn and growth. Because of this, Happened does not expect any effect on its expected growth. Q2 2022 has been a record-setting quarter [for the company],” Ojansuu said. “Having just closed our Series B round we are in a great position, and we have a lot of job openings, especially in tech and sales.”

In the near term, Ojansuu says that the plan is to invest in Happeo’s product development with a focus on adding new app and service integrations. Further expansion in North America is in the works, which will affect Happeo’s sales and customer success teams in New York.

Happeo currently has 124 employees and expects to have 160 by the end of the year.