Eka Care, a startup that aims to digitize the health records of Indian patients, has raised $15 million in a new financing round as it looks to hire more engineers and bring additional doctors to its platform, which has amassed over 30 million registered users and 5,000 doctors.

“I don’t see a future where you will continue to keep a large part of your health data non-digital,” Sahni said in an interview with TechCrunch.

Today, his platform is enabling close to half a million chronic patients to store their health records digitally.

“When you go to a doctor, and you have a medical record file, the doctor has to go through every page of that file, which is impossible for anyone to read through and remember,” said Tuli. “But if it’s a graph, it is easy to remember and see… That’s the fundamental difference for a doctor.”

Bengaluru-headquartered Eka Care started its journey as a record-keeping app for doctors and patients. Last year, it received approval from New Delhi’s Ayushman Bharat Digital Mission (ABDM) to allow users to create and use their Ayushman Bharat Health Account (ABHA) and integrate the platform into the Unique Health Interface (UHI).

The government envisions ABDM to offer a unified digital health infrastructure. At the same time, ABHA works as an individual account to help consumers easily share their health data with doctors, hospitals, pharmacies and health tech companies. UHI, on the other hand, offers an interoperable IT network through which people can connect with different healthcare providers using their ABHA identities.

“The essence of UHI and ABDM is that public health record apps will be the health locker for patients,” Sahni said. “It is absolutely what we want for the users. So, it was a natural integration for us.”

Sahni said that while using ABDM is optional for users, Eka Care recommends consumers to create their health IDs as it enables them to share their health records to the open ecosystem.

“We find that for any key venture investment market, timing is critical,” Akshay Mehra, India Lead, Hummingbird Ventures, told TechCrunch. “In this case, with the help of or through the government pushing ABDM, we thought that the Eka team is well positioned to execute on that strategy.”

Mehra also pointed to Sahni’s previous experience working with the government — where he was a part of the team working behind India’s contact-tracing app Aarogya Setu — as one of the reasons that convinced Hummingbird Ventures to make the investment decision.

“Outside of the competition, we don’t want to name any players, of course, but their patient-first approach is the hardest to crack,” he said.

A number of companies have embraced the government’s digitization plan in recent quarters and have started offering solutions based on the UHI. These include players such as DRiefcase, Docon and Bajaj Finserv Health.

Without explicitly naming competitors, Sahni told TechCrunch that many players still see health as a transactional journey. “We will be, at least, 50x more in terms of our MAUs, DAUs, and a total number of users that are using our platform,” he said.

The executive also pointed out that Eka Care has both patients and doctors on its platform, bringing a competitive edge over similar healthcare offerings. “Somehow due to our broader tech business edge, we have been able to leverage the tailwinds, which is from CoWIN, ABDM, the best in the market,” Sahni said.

In addition to supporting the government ecosystem, the company offers a Gmail integration to store medical records directly from emails. It also allows users to upload medical documents via WhatsApp or by clicking their photos. Eka Care’s mobile app also includes a heart rate monitor feature that uses the smartphone’s camera to suggest heart rate. 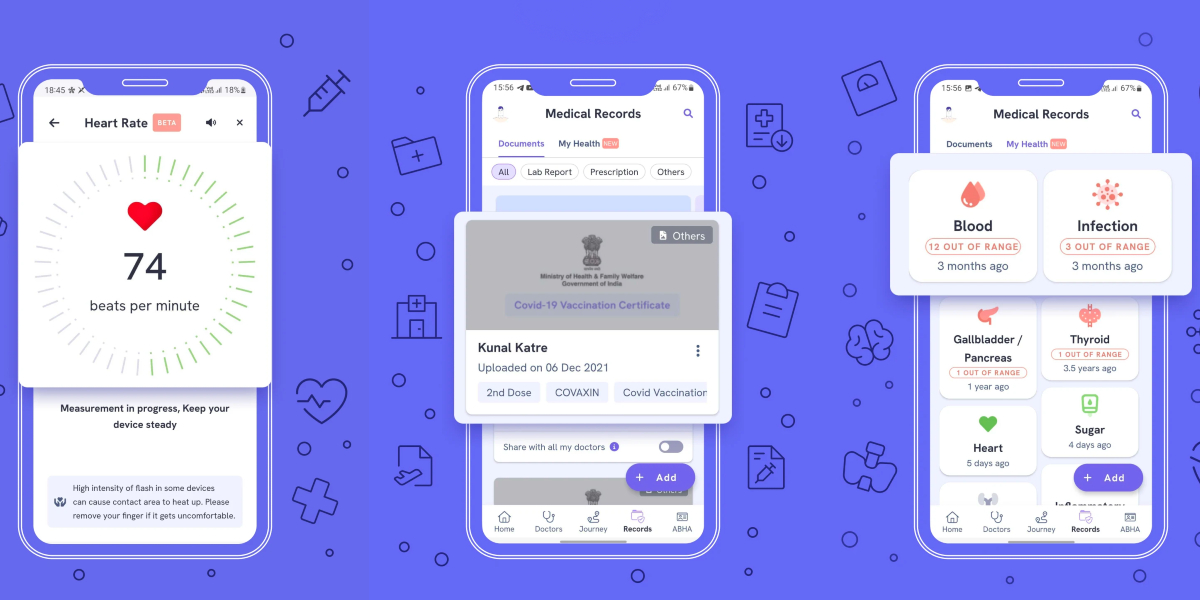 “We got some really good people in our tech team. They’ve done a good job. Many of these guys have worked with me at Aarogya Setu and Goibibo as well,” said Sahni. “I have not seen any more hacking attempts ever in my life than I have seen on Aarogya Setu during my stint. And fortunately, all the learnings that we had is now we are putting it up on Eka Care.”

The company also works with external agencies and has an internal security and anonymization team to ensure the safety of user data, he said.

“There is an external agency that we have employed. They do penetration testing on our systems every month,” said Sahni. “They test us as a hacker like white hat hackers externally and try to give us any early warnings that we have done.”

Eka Care also claims that it never rents or sells user “information or data to anyone” and never uses or transfers its user data “for serving ads, including retargeting, personalized, or interest-based advertising.”

At present, Eka Care operates with a subscription-based model to generate revenues. It sells subscriptions to doctors to allow them to connect with their patients and keep their records digitally stored on the platform.

“Our objective is that the doctor should be able to finish typing on the electronic medical record (EMR) in less than 30 seconds. The rest of the time, they should just talk to the patient, understand more about them, and give them more confidence,” Tuli said.

Eka Care plans to expand its revenue model and explore more avenues to monetize its offering. A part of the funding it has received in the fresh round is intended to be used specifically for monetization experiments.

“If consumers are not willing to pay, then maybe insurance companies are willing to pay because they are taking insurance. So, there are many avenues,” Sahni said.

Eka Care is also planning to expand its workforce, which currently comprises about 150 people, by hiring more engineers and speeding up the process of onboarding doctors. It has its sales team in 14 cities, including tier-two towns and metros, to onboard doctors. However, there are plans to expand that reach to new cities.

With the new funding, Eka Care has raised a total of $19.8 million — including $4.8 million before the current round. The exact valuation of the company after the fresh funding has not yet been disclosed. However, Tuli said it would be closer to “three-digit million dollars.”

“In Vikalp and Deepak, we are backing an exceptional team that has experience and expertise in building and scaling digital platforms,” ​​said Ashish Dave, CEO, Mirae Asset Venture Investments (India), in a statement.