Autonomous flight is a grand challenge in aviation — and a gold mine. The first company to crack it at scale stands to reap handsome profits from transportation and logistics alone. In 2020, the size of the global cargo airline industry was $110.8 billion, according to Statista, and one source estimates that it will generate hundreds of billions in revenue by 2027.

Xwing is one of the startups chasing after self-flying planes, as is Reliable Robotics, Pyka and the unicorn Volocopter. They’re not the only ones. Roughly a year ago, Boston-based Merlin Labs emerged from stealth with an autonomous flight system designed to be installed in existing aircraft. While Merlin told TechCrunch at the time that it had “hundreds” of test flights under its belt, the company’s system lacked certification from the US Federal Aviation Administration (FAA) to provide commercial service.

That changed recently. In September, Merlin achieved approval from the FAA and New Zealand’s Civil Aviation Authority (CAA) for its “certification basis” for autonomy system as part of a joint project between the FAA and CAA. Post-certification, Merlin landed partnerships with air fleet operators Dynamic Aviation and Ameriflight and branched into defense, revealing that it would supply its system to the US Air Force to retrofit the service’s C-130J Super Hercules cargo planes.

Evidently pleased with the progress, investors have poured significant capital into Merlin, driving the size of its Series B round to $105 million. The round, announced today, was co-led by Snowpoint and Baillie Gifford with participation from GV (formerly Google Ventures) and brings Merlin’s total raised to $130 million.

“Merlin was founded to define what’s possible in the next 100 years of aviation,” CEO Matt George told TechCrunch in an email interview. “A core part of my interest in founding Merlin is to increase pilot safety and operational flexibility by adding autonomous systems to existing aircraft.”

George is a two-time founder, having previously launched Bridj, a platform that supports on-demand public transportation providers. Bridj gained modest traction in Boston, Washington, DC, and Austin before it ran out of runway, selling its assets, including the brand, to the Australian company Transit Systems. With Merlin, George — drawing on his experience as a pilot — hopes to make a softer landing.

“We’re going to continue to achieve our certification milestones… [W]and want to build on that record of trust and safety with the new funding,” George said. “The business case is relatively simple: in a world of increasing transportation costs and a global shortage of pilots, autonomy can help to ease the burden of cost on companies, and at the same time can increase safety for pilots themselves, who now have an always-on, alert, and intelligent robotic co-pilot within the airframe they’re already familiar with.”

Merlin’s avionics system uses GPS, inertial navigation systems, air data, and altitude and heading reference systems to establish an aircraft’s current position and altitude. The system performs actions using actuators connected to the plane, which are directed by the onboard flight computer.

Flight is complex; fatal crashes like Lion Air Flight 610 in 2018 and Ethiopian Airlines Flight 302 in 2019 are sobering reminders of this. But George argues that autonomy in the air is easier than, say, the road because ground-based radar offers “complete vision” of nearly everything in the sky — at least in the US He sees Merlin’s technology merely building on the autopilot systems that are ubiquitous in large commercial aircraft today, which often handle in-flight procedures as well as landing.

As a fallback, pilots fly alongside Merlin’s system within equipped aircraft, George says, and their data is used to improve the system’s efficiency and safety. 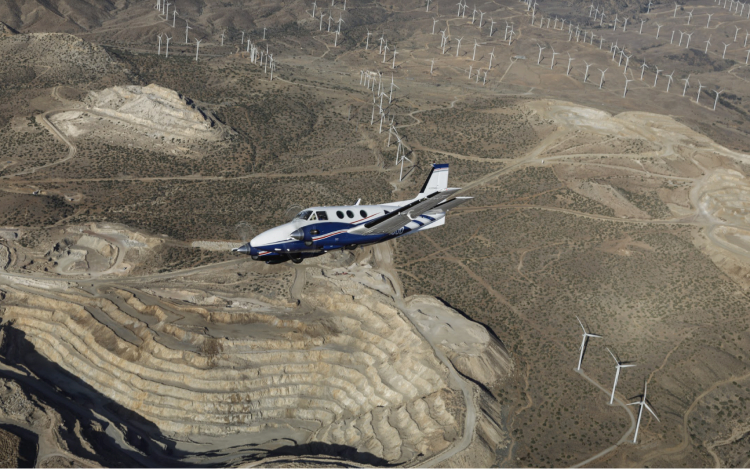 One particularly unique aspect of Merlin’s product is its use of speech recognition to interface with air traffic controllers. As George explains, Merlin’s system is designed to receive verbal instructions from control towers, recognize and interpret the instructions and adjust flight instructions accordingly. George says that the system had to be trained on a range of accents and voice types to ensure it was “genuinely robust and useful.”

Speech recognition being fallible, the human pilot takes over in instances where it fails.

Even with over $100 million in funding, Merlin isn’t as well-financed as some of its competitors. But George claims that the startup is already generating “8+ figures of revenue,” which he sees as a major milestone in the nascent market.

Defense is likely to be a lucrative new line of business for Merlin in light of recent geopolitical developments. One rival, Shield AI, recently raised $165 million at a $2.3 billion valuation to fuel development of its military autonomous flying systems.

Fast Company previously reported that Merlin was working with the Air Force under an “other transaction authority” (OTA), a procurement contract in which the government funds the development of a technology until it is mature enough to fulfill the terms of a defense contract. Merlin described the amount as “much larger” than the traditional million or so dollars at which OTAs usually top out.

“The autonomous flight industry, in addition to the technical challenges inherent to getting planes to fly on their own, faces challenges from regulatory and public perception … We’re facing these challenges by working alongside key stakeholders to ensure a safe, measured approach to autonomous flight,” George said. “The challenge the pandemic presented also serves as a demonstration of the value of what we’re enabling in aviation: the pandemic fundamentally shifted the ways people shop, which in turn put enormous pressure on retailers, carriers, and logistics companies to transport and deliver goods in a timely manner, and strained the aviation system in general.”

George says that Merlin will put the money from the latest funding towards expanding testing, building a New Zealand–based Part 135 freight capability, and growing its 70-person headcount across the US and New Zealand. (Merlin Labs has offices in Los Angeles, Denver and New Zealand, as well as a dedicated flight facility in the Mojave Desert.) In New Zealand, Part 135 rules prescribe the operating requirements for aircraft with fewer than nine seats and helicopters.

Merlin has previously said that it expects to see autonomous flights that can take off, navigate, land and converse with air traffic control as soon as 2023.